Who is Operation Hope?

In 2008 God gave Stephen Pilkington an experience and vision for future ministry that has become the format of everything that followed. Prayer first  Prayer throughout  Prayer till the end. A house of prayer was founded in which God called the partakers to seek Him on a level they have never known. If you will seek me for Holiness beyond all youve seen I will set you on fire. As the house of prayer continued a strong call to missions was given and a call to the nations. Operation Hope was the name given to the things God commanded them to do when in the place of prayer. Over the years Operation Hope have been involved in many tent missions, church plants, a stadium event in the UK, an orphanage in Kenya, well production and many crusades in various parts of the world.

What is the Big Tent Africa vision?

We have trustworthy bishops such as Raphael Baluma in Kakamega (African Director of Operation Hope), who have proven themselves as partners for the gospel over the years. God has given a relationship in the government offices ready to help us import this new equipment.

God has been powerfully confirming His plans almost daily from day one. Many times, Scripture and words of knowledge coming from the mouths of witnesses who couldnt know. 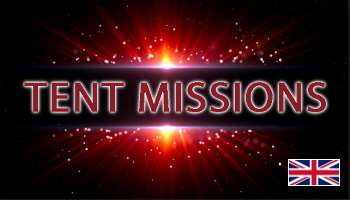